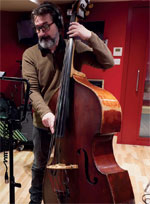 Fred graduated from the Nice Conservatory of Music, and from Marseille and Toulon in various areas of music—jazz and contemporary—with a teacher's degree. He works with local big bands, gospel choirs and orchestras, teaches the bass and coaches bands in Sanary, Southern France. Fred has performed all around the world since 1983, playing with various artists including Linda de Suza, Angelo Branduardi, Babik Reinhardt (Django's son) and Ennio Morricone.

He toured with Aioli in the late 90s and was music director and co-composer on the show Age Tendre in Lebanon, which starred several French chart topping artists like Julie Pietri, Herbert Leonard, Jeanne Manson, Phil Barley and Philippe Laville, among others. He is renowned for his talent in composing and arranging music, and has worked with the Gipsy Kings on several projects.