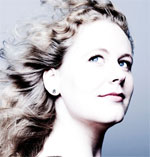 Dutch mezzo-soprano Christianne Stotijn was born in Delft and studied with Udo Reinemann, Jard van Nes and Dame Janet Baker. Over the years Christianne has won numerous awards, including the prestigious ECHO Rising Stars Award 2005/2006, the Borletti-Buitoni Trust Award in 2005, and the Nederlands Muziekprijs in 2008. In 2007 she was selected as a BBC New Generation Artist.

Christianne is a passionate interpreter of art songs. Accompanied by the pianists Joseph Breinl and Julius Drake, with whom she has a longstanding duo partnership, she has appeared in the world’s leading concert venues including the Concertgebouw, La Monnaie and Wigmore Hall. She regularly performs chamber music with musicians such as the violist Antoine Tamestit, her brother the double bassist Rick Stotijn and the Oxalys Ensemble.