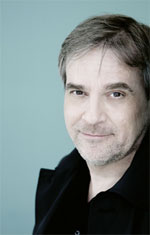 Chief Guest Conductor of the BBC Philharmonic Orchestra and Principal Guest Conductor of Canada’s National Arts Centre Orchestra Ottawa, John Storgårds has a dual career as a conductor and violin virtuoso and is widely recognised for his creative flair for programming as well as his rousing yet refined performances. As Artistic Director of the Lapland Chamber Orchestra, Storgårds earned global critical acclaim for the ensemble’s adventurous performances and award-winning recordings.

He has won particular acclaim for his interpretations of works by Sibelius and Nielsen, and his repertoire also includes all the symphonies by Beethoven, Brahms, Bruckner, Mozart, Schubert, and Schumann. His commitment to discovering new or unknown repertoire has resulted in many world premiere performances of music by Brett Dean, Kaija Saariaho, Per Nørgård, Korngold, and even Sibelius, amongst many others.

Storgårds’ vast discography showcases his repertoire interests and engagement with many different orchestras and includes numerous award-winning discs. His recording of Pēteris Vasks’s second symphony and violin concerto, featuring him as soloist, received the Cannes Classical Disc of the Year Award in 2004, and Storgårds and Currie’s Rautavaara disc with the Helsinki Philharmonic Orchestra won a Gramophone Award in 2012. His recording of concertos for theremin and for horn by Kalevi Aho received an ECHO Klassik award.

John Storgårds studied violin, composition, and conducting at the Sibelius Academy in Helsinki, and also violin with Chaim Taub in Israel. He received the Finnish State Prize for Music in 2002.