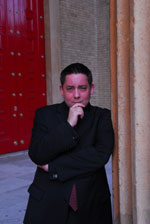 see also Andrew-John Smith (conductor)
The English organist and conductor, Andrew-John Smith, was educated at Oxford University and the Sweelinck Conservatorium, Amsterdam. Variously described as ‘hugely talented’ (The Observer), ‘mightily impressive’ (Fanfare, USA), and ‘a constant delight’ (Gramophone) he performs regularly in Europe and has recorded and broadcast as soloist and accompanist both for the BBC and abroad. A Fellow of the Royal College of Organists, he has been a finalist for the Grand Prix de Chartres, and a prize-winner at the Royal College of Organists’ ‘Performer of the Year’ and the St Albans International Organ Festival.

Concerto performances have included Rheinberger at St John’s, Smith Square, with the National Musicians Symphony Orchestra and Poulenc and Saint-Saëns with the English Chamber Orchestra. He has worked among others with Concordia, Mark Levy, Elizabeth Kenny, The Quintessential Sackbut and Cornett Ensemble, and Leslie Howard. His regular partnership with the countertenor Robin Blaze has involved numerous recitals and several broadcasts for BBC Radio 3. He has been director of music at St Peter’s, Eaton Square, in London since 1997 and is Artistic Consultant to Eaton Square Concerts.