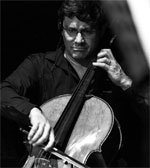 Nicholas is a keen chamber musician having recorded flute quartets for the EMI label (BMV, Holland) and later being a member of the English String Quartet for nine years. He is currently in his 25th year of being a member of the Balanescu Quartet with whom he tours the world, performing in such venues as Sydney Opera House, La Scala (Milan), QEH & Royal Festival Hall. The quartet has had much critical acclaim for their latest folk/classical album entitled ‘Maria T’ on the EMI label. The group have also recorded eleven albums under Decca and Mute labels. Their collaborations have included performances and recordings with Rabi Abu Khalil, David Byrne, Spiritulized, Petshop Boys, and Kraftwerk.

His next project is to record a newly commissioned concerto for cello with bass extension and orchestra by the jazz trumpeter and composer, Guy Barker.