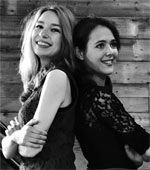 Two pianists who love to amaze, surprise and spread the joy of classical music! Beth & Flo from The Netherlands, use their distinctive musical flair blended with a hint of theatre and a clear joy in communicating with their audiences to make their way along the keys.

Beth & Flo, i.e. Elsbet Remijn and Claudette Verhulst, first met during their studies at the Royal Conservatoire of The Hague (NL). After graduating for their Masters and discovering that they like to share the stage together they have performed in venues such as Het Concertgebouw Amsterdam, TivoliVredenburg in Utrecht, and several other halls and theatres in The Netherlands and Belgium. They also performed in New York, London and Sicily. In Sicily, participating in the international music competition IBLA Grand Prize, they were awarded as ‘Most Distinguished Musicians’ with a jury mark of an 8.7. Also, they received a special mention for their performance of a piece by the Dutch composer Ruben Naeff.

In 2016 the duo released their first professional recordings, followed by new recordings in 2018. Both of these were released as ‘Een Vleugeltje Klassiek’: the one and only Beth & Flo USB-sticks, shaped like a tiny grand piano.