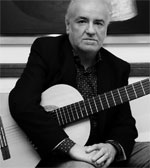 Both as recitalist and soloist with orchestra Sergio has played concerts in many countries around the world across five continents, and has appeared and recorded with internationally renowned symphony and chamber orchestras.

Over the years Sergio has premiered several works written for him by outstanding composers from Latin America, Canada, the USA, Europe, Asia and Africa. Current projects include collaborations with composers such as Oliver Davis (UK), Alan Broadbent (US), Polo Piatti (Argentina-UK), Gabriel Estarellas (Spain), Lee Holdridge (US), Raymond Torres-Santos (US), Belinda Reynolds (US) and Noelia Escalzo (Argentina).