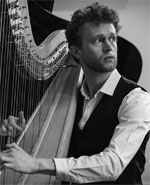 Oliver Wass studied at the Guildhall School of Music & Drama with Imogen Barford. He graduated from the University of York with a First Class Honours degree in Chemistry.

He has won International Competitions in Italy, Hungary, and the UK, and he is the only harpist ever to win the Guildhall Gold Medal—the Guildhall’s most prestigious prize.

He has performed every major harp concerto, including Lyra Angelica with the Philharmonia Orchestra, the Mozart Flute and Harp Concerto with The Mozartists at the Wigmore Hall, and he has directed the Handel Harp Concerto in the Barbican Hall.