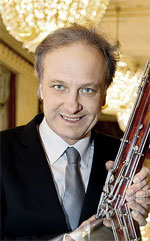 Stepan Turnovsky was born in 1959 to a family of musicians from Prague that moved to Vienna in 1968. He began playing the bassoon at the age of 14 in the class of Prof. Karl Öhlberger at the University of Music and Performing Arts in Vienna (MDW) and graduated with distinction in 1981.

Stepan joined the Vienna State Opera and the Vienna Philharmonic Orchestra in 1978 and has kept the position of Solo Bassoonist since 1985, performing with conductors such as Herbert von Karajan, Leonard Bernstein, Karl Böhm, Carlos Kleiber amongst many others.

In addition to his role as a longtime member of the orchestra, he has played an integral part of several chamber ensembles as well as participated in numerous recordings and concert tours with the Wiener Bläserensemble, the Wiener Virtuosen, and Wiener Oktett. In 2006 he took part in the international Super World Orchestra tour in Japan, playing alongside prominent orchestral soloists from around the globe.

Stepan Turnovsky is also active as a teacher and has held a professorship at the University for Music and Performing Arts in Vienna since 2001. In addition, he has taught master classes all over the world, most notably at the Manhattan School of Music in New York, the Hannover University of Music, Drama and Media (HMTMH) in Germany, the Tokyo University of the Arts and the Pacific Music Festival in Japan.