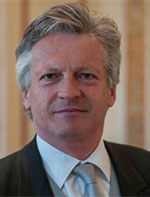 Born in Austria in 1955, Ernst Ottensamer studied the clarinet at the Unversität für Musik und darstellende Kunst in Vienna; he returned to his alma mater in 1986 to teach, and was made Professor in 2000. He began playing with the Orchestra of the Vienna State Opera in 1979, and was appointed Principal Clarinet of the Vienna Philharmonic Orchestra in 1983.

Ernst founded numerous chamber ensembles (Wiener Virtuosen, Wiener Bläserensemble, Wiener Solisten Trio), and performed with the Alban Berg Quartet, the Artis Quartet and the Hugo Wolf Quartet. Other chamber music collaborations include with Sir Simon Rattle, André Previn, Daniel Barenboim, Rudolf Buchbinder, Julian Rachlin, Mischa Maisky and Angelika Kirchschlager, amongst others. In 2005 he co-founded the Clarinotts, a clarinet trio comprising of Ernst and his sons Daniel and Andreas Ottensamer—themselves the Principal Clarinettists of the Vienna Philharmonic and Berlin Philharmonic Orchestras.

He appeared as a soloist with the Vienna Philharmonic, Vienna Chamber Orchestra, Budapest Philharmonic, Salzburg Mozart Orchestra, Linz Bruckner Orchestra, the Gächinger Kantorei and the Tokyo Philharmonic, under conductors including Hans Graf, Sándor Végh, Helmuth Rilling, Leopold Hager, Simone Young and Sir Colin Davis. He made a number of recordings.

Ottensamer appeared several times with the Academy of London, making his UK solo debut with them in 1991 and in 1994 giving his first performance of the Copland concerto.