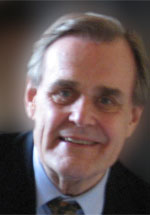 Richard Stamp, the Academy of London’s founder and Artistic Director, was born in Evanston, Illinois in 1943. He was encouraged to take up conducting professionally by Sir Georg Solti who heard him conduct at Cambridge University. Stamp studied in London with Sir Colin Davis and in Vienna at the Academy of Music and Performing Arts with Hans Swarowsky and the composer Friedrich Neumann.

On returning from Austria Richard Stamp became assistant conductor of the Royal Ballet, conducting more than sixty performances for the company. On leaving he was awarded a conducting fellowship by the Boston Symphony Orchestra to go to Tanglewood. In the later ‘70s Stamp was active in music education on both sides of the Atlantic, working with the orchestras of the Guildhall School of Music and Drama in London, the Chicago Civic Orchestra (training orchestra of the Chicago Symphony Orchestra) and, finally, for two years the Resident Conductor of the Cleveland Institute of Music.

Founding the Academy of London in 1980, Stamp’s subsequent work, and in particular his recordings for ASV and Virgin Classics, received a wide international recognition. This included the Vierteljahrliste of the Preis der Deutsches Schallplatttenkritik, outstanding reviews in the United States and France, three stars and a rosette in the Penguin Record Guide, and Strauss’s Metamorphosen selected as ‘Collector’s Choice’ in CD Record Review’s ‘Building a Library’ on BBC Radio 3. In addition to the Academy of London, Stamp has worked with the Royal Philharmonic Orchestra, the BBC Scottish Symphony Orchestra and the Royal Northern Sinfonia, and with orchestras in France, Germany, Switzerland, Poland, the USA, China and Canada (recording with the Toronto Chamber Orchestra for RCA Red Seal). In the choral field Stamp has conducted several of Austria’s leading choirs, including the Vienna Singverein, the Arnold Schoenberg Chor and the Vienna Boys’ Choir, and for his services to Austrian music was awarded in 1996 the Grosses Ehrenzeichen des Landes Kärnten and Austria’s millennium medal, the Östarrichi-Taler.