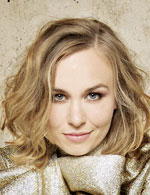 Elsa made her debut at the Opéra de Paris as Pamina and has since returned as Lauretta (Puccini’s Gianni Schicchi), Elvira (Bellini’s I puritani) and Zerlina in Ivo van Hove’s new 2019 production of Mozart’s Don Giovanni. Other highlights include Micaëla (Bizet’s Carmen) at the Festival d’Aix-en-Provence, and Musetta (Puccini’s La bohème) and her role debut as Massenet’s Manon at the Opernhaus Zürich.

In concert, Elsa has collaborated with orchestras including the Staatskapelle Berlin, the Berlin Philharmonic, the London Symphony Orchestra, the Vienna Philharmonic Orchestra and the Munich Philharmonic, under the baton of conductors such as Daniel Barenboim, Sir Simon Rattle, Fabio Luisi, Franz Welser-Möst, Massimo Zanetti and David Zinman.

Elsa is an exclusive recording artist with Warner Classics (Erato). Her award-winning first solo-album Miroirs was released in 2018, and 2020 saw the release of her second album, Morgen, with the pianist Jonathan Ware. She also features on the recording of Massenet's Don César de Bazan on Naxos.