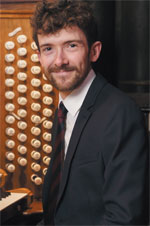 John Challenger was an Organ Scholar and, latterly, Assistant Organist at St John’s between 2008 and 2012. He returned to St John’s for the Lent Term of 2017 to act as Director of Music during the sabbatical of Andrew Nethsingha.

John received his early musical education as a chorister at Hereford Cathedral under Dr Roy Massey and Geraint Bowen. A Fellow of the Royal College of Organists, he was taught the organ by Frédéric Blanc, Geraint Bowen, David Briggs, Jeremy Filsell, Mark Williams, and the late David Sanger. Since 2012, John has held the role of Assistant Director of Music at Salisbury Cathedral, where he accompanies the majority of Cathedral services on Salisbury’s famous ‘Father’ Willis organ, and assists in the running of the Cathedral choirs.

Working regularly as a conductor with Salisbury Musical Society and Salisbury Symphony Orchestra, recent performances have included Rossini’s Petite Messe solennelle and Haydn’s Missa in angustiis. Alongside organ teaching work, John has been responsible for many recent initiatives at Salisbury Cathedral including Organ Vespers, the Organ Prom, the Cathedral’s ‘virtual’ Father Willis Organ, and several solo albums which have won critical acclaim. Most recently, he recorded the album Salisbury Meditation to raise funds for NHS Charities Together, following widespread coverage of the organ music which was provided during COVID-19 vaccinations inside Salisbury Cathedral.