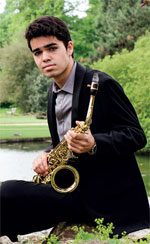 Ignacio Mañá Mesas (b. 1998) is a Spanish saxophonist and composer who is currently based in the UK. In 2015, he passed his LTCL Saxophone Recital Diploma with distinction and finished his musical studies in Spain with honours, obtaining the Extraordinary Prize in Castilla y León with the best mark in his region and receiving a nomination for the National Music Award. He then decided to continue his studies at Chetham’s School of Music (Manchester) after receiving a scholarship, and offered solo recitals, conducted and premiered his compositions at The Bridgewater Hall, Stoller Hall, Royal College of Music and Arts Club. In 2017, he was highly commended at the BBC Proms Inspire Young Composers’ Competition, reached the final of The Arts Club Karl Jenkins Classical Music Award and won Second Prize in the ENKOR International Music Competition. That same year, after finishing his studies at Chetham’s, he received offers and scholarships from the Royal College of Music, Royal Academy of Music and Royal Conservatoire of Scotland. He graduated from St John’s College, Cambridge in 2020, having read Music. Whilst there he received saxophone lessons at the Royal Academy as part of the CAMRAM Scheme. At Cambridge he was awarded a St John’s Bursary, two Wright Prizes, two McAulay Scholarships, as well as an Earle Prize and a Donald Wort Prize for the highest overall result in the examinations of his second-year cohort. He also won First Prize at the Cambridge University Concerto Competition 2018, performing Tomasi’s saxophone concerto with the Cambridge University Orchestra in November 2018. As a composer, his music has been performed in Spain, the UK and Malta by world-renowned music groups such as The Choir of St John’s College Cambridge, Sigma Project Quartet, Birmingham Contemporary Music Group and Krom Ensemble.