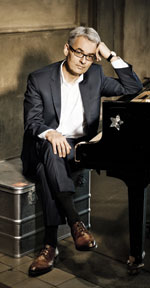 ‘Markus Becker is unbeatable as a virtuoso, a musical soul-painter with great understanding’ (Frankfurter Allgemeine Zeitung). For many years, Markus has impressed audiences and critics alike as a persuasive and articulate interpreter of piano literature from Bach to Rihm. Also a virtuoso jazz improviser, he is an exception among classical pianists. Markus performs regularly at festivals such as the Klavier-Festival Ruhr, the Schleswig-Holstein Musik Festival and the Kissinger Sommer. He has played with orchestras such as the Berliner Philharmoniker, Rundfunk-Sinfonieorchester Berlin, the radio symphony orchestras of the NDR, WDR and SWR in Germany, and the BBC National Orchestra of Wales under conductors such as Claudio Abbado, Howard Griffiths, Michael Sanderling and Thierry Fischer.

Markus Becker’s chamber music partners include Albrecht Mayer, Nils Mönkemeyer, Adrian Brendel, Igor Levit, Sharon Kam and Alban Gerhardt. He studied with Karl-Heinz Kämmerling and for many years benefited from the advice and inspiration of Alfred Brendel. Since 1993 he has been a professor at Hanover’s Hochschule für Musik, Theater und Medien.

Following his debut album of the F sharp minor sonatas of Brahms and Schumann, and further recordings for Harmonia Mundi and EMI, Markus Becker recorded the first complete edition of Max Reger’s piano works. This series of twelve CDs was awarded the Deutscher Schallplattenpreis and the Echo Klassik award for the best solo recording of music from the nineteenth century. For Hyperion, Markus has recorded piano concertos by Widor, Jadassohn and Draeseke, Bach-Reger transcriptions, piano sonatas by Hindemith and Reubke, Erwin Schulhoff violin sonatas with Tanja Becker-Bender, and Reger cello sonatas and Rostropovich Encores with Alban Gerhardt.