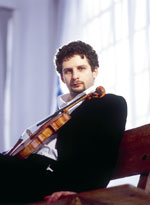 Winner of the 1998 International Violin Competition ‘Premio Paganini’, Ilya Gringolts was also awarded two special prizes, as the youngest-ever competitor to be placed in the final and the best interpreter of Paganini’s Caprices. Ilya studied violin and composition at the St Petersburg Special Music School with Tatiana Liberova and Jeanna Metallidi and at the Juilliard School in New York with Itzhak Perlman and the late Dorothy Delay. He was also one of twelve young artists selected by the BBC for their New Generation Artists scheme.

Ilya Gringolts has performed with the world’s leading orchestras and conductors, including Daniel Barenboim, Kurt Masur, Mstislav Rostropovich, Yuri Temirkanov, Vassily Sinaisky and Vladimir Jurowski. He has also undertaken extensive tours of Asia and Australasia, and in October 2007 he appeared in a gala concert in Osaka to mark the twenty-fifth anniversary of the Osaka Symphony Hall.

Ilya Gringolts’s recital highlights include appearances at the Verbier and Lucerne festivals, Alte Oper, Frankfurt, the Palau de la Musica, Valencia, the Louvre and the Colmar Festival, together with annual invitations from the Milan Serate Musicali. Ilya is an active in the recording studios, with several recordings for Deutsche Grammophon—including a Gramophone Award-winning CD of Taneyev chamber music—and for BIS.

Ilya Gringolts plays a Ruggeri violin loaned to him by Otto Karl Schenk, of Bern, Switzerland.