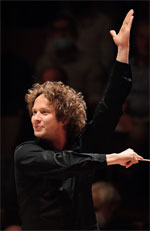 Santtu-Matias Rouvali first conducted the Philharmonia in 2013, aged 27. He was instantly recognised by the players as 'an inspiring individual … a musician with spirit and passion akin to our own' (Cheremie Hamilton-Miller, Vice-President of the Philharmonia Orchestra and member of the Viola section)

In 2018 he became Principal Guest Conductor and in 2019 the Orchestra named him as its next Principal Conductor, becoming just the sixth person to hold that title upon taking over from Esa-Pekka Salonen in 2021.

On his appointment, he said: 'This is the start of a great adventure. The players of the Philharmonia can do anything: they are enormously talented and show an incredible hunger to create great performances. There is huge possibility with this orchestra, and we will do great things together.'

He has conducted a wide range of music with the Philharmonia, from blockbusters by Strauss and Rachmaninov to lesser known works by his compatriots Sibelius and Lindberg. In 2020 his first Philharmonia CD, a live recording of excerpts from Tchaikovsky’s Swan Lake, was released by Signum Records.

Rouvali is also Chief Conductor of Gothenburg Symphony, and retains his longstanding Chief Conductor position with Tampere Philharmonic Orchestra close to his home in Finland. With Gothenburg Symphony he is recording an ambitious Sibelius cycle—the first two volumes both received the Choc de Classica, and the first was also named Gramophone Editor’s Choice and Diapason D’Or ‘Découverte’. In Tampere, alongside a busy symphonic conducting schedule, he has conducted Verdi’s La forza del destino, and the world premiere of Olli Kortekangas’s My brother’s keeper (Veljeni vartija) with Tampere Opera.