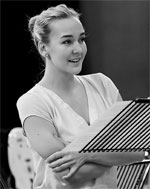 Ida Ränzlöv was born in Helsingborg, Sweden, and graduated with distinction from Malmö Academy of Music in 2016. The same year she joined the International Opera School at London’s Royal College of Music, graduating in 2018 as a recipient of an Independent Opera Voice Award. She also studied at the Solti Accademia di Bel Canto in 2017, was a Glyndebourne Jerwood Young Artist in 2018, and in the same year became an Associate Artist of Classical Opera and The Mozartists. She won the 2017 Lies Askonas Competition, and was a semi-finalist in the 2018 Kathleen Ferrier Competition.

She is currently a member of the ensemble at Staatsoper Stuttgart, where her roles have included Nancy Tang (Nixon in China), Dryade (Ariadne auf Naxos), Rosina (Il barbiere di Siviglia), The Page of Herodias (Salome) and Cherubino (Le nozze di Figaro). Her other roles have included Kate Pinkerton (Madama Butterfly) for Glyndebourne Festival Opera, Mercédès (Carmen) for the Royal Danish Opera, the title role in Faramondo for the London Handel Festival, Eduige (Rodelinda) for the Cambridge Handel Opera Company, The Daughter (The Vanishing Bridegroom) for British Youth Opera, and Arminda (La finta giardiniera) and The Fox (The Cunning Little Vixen) at the Royal College of Music. She made her debut with The Mozartists in January 2020 at Wigmore Hall, and her previous recordings include songs by Lindblad, Jacobson and Geijer on Volume 4 of Malcolm Martineau’s ‘Decades—a Century of Song’.