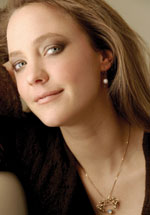 Born in Freibug, Lydia Teuscher sings in recital, concert and opera worldwide. She has sung in recital in London, Cologne and Antwerp; and in concert with Helmuth Rilling and the Bachakademie Stuttgart, the Hanover Band in Brighton and London, with the Gürzenich-Orchester Köln and Markus Stenz, with the Royal Concertgebouw Orchestra and Sir Roger Norrington, with Double Bande and René Jacobs (with whom she has also recorded Telemann’s Brockes Passion), with the Orchestra of the Age of Enlightenment in London and on a tour to Korea and Japan, and with the Tonhalle Orchestra Zürich and David Zinman. She has toured Canada with Bernard Labadie and Europe with Ton Koopman and Amsterdam Baroque.

Other concert engagements include J C Bach’s Lucio Silla with Ivor Bolton for the Salzburg Mozartwoche, Haydn’s Paukenmesse with the BBC Scottish Symphony Orchestra and Bernard Labadie, and Handel’s Aci, Galatea e Polifemo with Le Concert d’Astrée and Emmanuelle Haïm, as well as Haydn’s Die Schöpfung with the Kölner Kammerorchester and a tour of Vivaldi and Bach Magnificats with Il Giardino Armonico.

On the opera stage she has appeared in Berlin, Munich, Glyndebourne, Aix-en-Provence and Salzburg as Pamina, in Glyndebourne as Hänsel, Cherubino and Susanna, and in Dresden as Pamina, Susanna and Gretel.