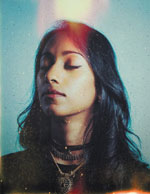 Multi-instrumentalist, Qawwa–l and veena virtuoso, Abi Sampa has become a genre-defying focal point within contemporary Sufi and fusion music. Her ability to seamlessly mix different styles and her command over both Western and Indian classical music have garnered Abi praise from all corners of the music industry. Having built upon her astonishing success on the talent show The Voice UK, Abi has since gone on to release a multitude of Sufi-influenced work—all to great critical acclaim.

Abi was born in northwest London to Sri Lankan Tamil refugees who had fled the civil war and unrest in their home country. Given her heritage, she grew up with the rhythmic rigour and melodic complexity of Carnatic music, studying singing and the veena under the tutelage of Saraswathi Pakiarasa and Sivadharani Sahadevan. During these early stages, Abi’s virtuosity was spotted and nurtured, resulting in her winning numerous awards and competitions.

Reflective of the multicultural nature of the city in which she grew up, Abi has explored and absorbed a myriad of musical styles and genres, all of which have formed the building-blocks of her unique vocal and instrumental style—one that has led Abi to perform at some of the most prestigious venues in the UK, such as Glastonbury Festival and Oxford’s Sheldonian Theatre, and to wow the judges on The Voice UK.

Of late, Abi has refocused her attentions on Sufi and Qawwa–li music. Having gained the support of both PRS for Music and Arts Council England, she has undertaken the challenging yet incredibly important task of revitalizing the art form for a contemporary audience.