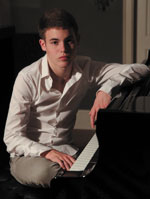 Pianist Alon Kariv is one of the most distinguished young musicians of his native country, Israel. Since early childhood, he has won first prizes in all the major Israeli piano competitions and has performed in the country’s most prestigious halls and series.

Kariv has performed as a soloist with the Israel Philharmonic Orchestra under Zubin Mehta, as well as with other major Israeli orchestras, including the Haifa Symphony, Ra’anana Symphonette and Ashdod Symphony orchestras. Internationally, Kariv has collaborated with the English Chamber Orchestra, RTV Slovenia Symphony Orchestra and Music Fest Perugia Orchestra. In New York he has performed at the Lincoln Center and Merkin Concert Hall, and has given performances throughout the UK, Holland, Italy and Slovenia.

In 2015 Kariv won Third Prize at the Kaufman Music Center International Youth Piano Competition in New York; later that year he won First Prize at the Tel-Hai International Piano Master Classes competition. In 2006 Kariv was a top candidate at the first Arthur Rubinstein International Youth Piano Competition, held in Beijing. From 2010 to 2016, Kariv received a yearly scholarship of distinction from the America–Israel Cultural Foundation, and in 2011 was invited to perform in their gala concert in New York.

Born in 1999 in Israel, Alon Kariv studied at The Juilliard School with Yoheved Kaplinsky and Julian Martin. Prior to his college studies, he studied at the Thelma Yellin High School for the Arts. He began playing piano at the age of five with Hanna Barzilay, and at fifteen continued his studies with Tomer Lev at the Buchmann–Mehta School of Music at Tel Aviv University. Kariv has participated in a number of masterclasses with some of the world’s greatest artists and pedagogues, including Murray Perahia, Sergei Babayan, Arie Vardi, Alexander Korsantia, Tatiana Zelikman and Garrick Ohlsson.