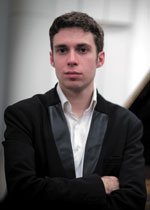 Daniel Borovitzky was born in 1991 in Samara, Russia, and immigrated with his family to Israel at the age of three. He has toured North and South America, Europe and the Far East as both soloist and chamber musician. As a soloist he has performed under Zubin Mehta at the Charles Bronfman Auditorium in Tel Aviv, and with the Royal Philharmonic Orchestra in London, St Petersburg Philharmonia, Israel Chamber Orchestra, Israel Camerata Jerusalem, Haifa Symphony Orchestra and Tel Aviv Soloists Ensemble, among many others. The concert halls in which he has performed include the Konzerthaus Berlin, the Teatro Colón and Teatro Gran Rex in Buenos Aires, the Concert Hall of the Central Conservatory of Music in Beijing, the National Auditorium of Sodre in Montevideo, the Auditorio Colegio Santa Úrsula in Lima, and numerous others throughout Russia, Germany, Brazil and Taiwan.

Borovitzky has recorded for several radio and TV stations, and has been heard on live broadcasts for Radio Nacional and Televisión Pública in Argentina, on stations in Berlin and Montevideo, and in multiple performances for the Israeli radio station IBA.

Borovitzky has won several international competitions, including the Grand Prix Animato (Paris, 2014), Isidor Bajić Memorial Piano Competition in Serbia (First Prize, 2012), Grand Prix at the Athens Young Pianists Competition (2002), St Petersburg Young Pianists Competition (2001), a special prize for the performance of Israeli music at the Aviv Competitions (2013), and the Clairmont Award (Tel Aviv, 2014). He has participated in the Aspen Music Festival and School, the International Holland Music Sessions festival in Bergen, and the Tel-Hai International Piano Master Classes. Borovitzky is a recipient of scholarships from the America–Israel Cultural Foundation (2002–16) and the Yehoshua and Margrit Lakner Foundation (Zürich, 2015–17).

Daniel Borovitzky started his piano studies at the age of eight. Among his teachers were Luisa Yoffe at the Hassadna Jerusalem Music Conservatory, and Arnon Erez. He completed his bachelor’s degree, studying with Tomer Lev at the Buchmann–Mehta School of Music at Tel Aviv University. In 2015/16 he studied at the Yale School of Music and thereafter received his master’s degree at the Hochschule für Musik und Tanz Köln.