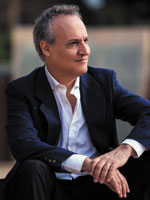 Tomer Lev enjoys an unusually versatile career as soloist, chamber musician and pedagogue. As a concert pianist he has performed extensively throughout Europe, North and South America, and the Near and Far East. He has collaborated with the Royal Philharmonic Orchestra and the English Chamber Orchestra in London, the Israel Philharmonic Orchestra, and the symphony orchestras of Hamburg, São Paulo, Buenos Aires, Tanglewood Festival, Varna Festival, Colorado, Quebec and Kiev, in addition to many others, including all the major Israeli orchestras.

As a recitalist and chamber musician, Tomer Lev has performed at the Lincoln Center in New York, the Berliner Philharmonie, Teatro Colón in Buenos Aires, the Beijing Concert Hall, Hamburg’s Laeiszhalle, the Rudolfinum in Prague, Sala São Paulo and Toronto’s Glenn Gould Hall, as well as all of Israel’s major halls, among them the Charles Bronfman Auditorium in Tel Aviv, Jerusalem’s Henry Crown Symphony Hall and the Haifa Auditorium.

Lev is a frequent guest at international festivals, from Tanglewood to Madrid, Xiamen to Sofia, the Israel Festival to the Prague Winter Festival. He has recorded for the radio and TV networks of the ZDF and SWF in Germany, the DRS in Switzerland, and the IBA in Israel.

First appearing with the Jerusalem Symphony Orchestra at the age of fifteen, Lev has since closely collaborated with all the Israeli orchestras, featuring in concert series with the Israel Philharmonic Orchestra (IPO) under Zubin Mehta, Yoel Levi and Jerzy Semkow. An enthusiastic chamber musician, he was a member of the Israel Piano Trio and toured with the ensemble across Europe and South America.

In 2004, together with the IPO, Zubin Mehta and businessman Josef Buchmann, Lev founded the Buchmann–Mehta School of Music and was appointed as its first director. The school trains Israel’s elite young musicians and nurtures a future generation for the IPO.

A graduate of the Thelma Yellin High School for the Arts, Lev studied the piano with his mother Naomi Lev, and composition with Tzvi Avni. He completed his BMus and MMus degrees at the Rubin Academy of Tel Aviv University (later renamed the Buchmann–Mehta School of Music), where he studied with pianists Arie Vardi and Viktor Derevianko. He received his doctorate from the State University of New York at Stony Brook, where he studied with pianist Gilbert Kalish.