The Pembroke College Girls’ Choir was founded by Anna Lapwood in 2018 and has quickly gained a reputation as one of the UK’s leading girls’ choirs. Contemporary music is the Choir's specialty, and sitting right at the heart of the Choir’s activities is performing and commissioning new music. Made up of 20 girls aged 11-18, The Pembroke College Girls’ Choir sings twice a week in the College Chapel, as well as regularly performing alongside the College Chapel Choir. They released their first album, All things are quite silent, alongside the Chapel Choir in 2020, receiving praise for their intonation, ensemble technique, and fresh, ingenuous delivery. They made their London concert debut shortly afterwards, performing repertoire from the release at St Martin-in-the-Fields. Other recent highlights have included performing Haydn’s Creation with Paul McCreesh and the Gabrieli Consort and Players. Alongside concerts and services, they have sung for TV broadcasts on BBC One and recorded at the world-famous Abbey Road studios alongside the Royal Philharmonic Orchestra and Grammy award-winning composer Christopher Tin.

The Choir is grateful for the continued support of our patron, Emma Johnson MBE. 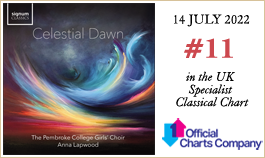