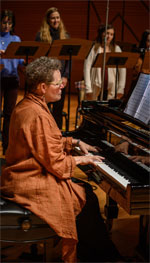 Lisa Edwards is a widely sought after pianist, keyboard collaborator and teacher, based in Los Angeles. She is currently in her 19th season as pianist/music assistant with Los Angeles Master Chorale, under the direction of Grant Gershon, the Kiki and David Gindler Musical Director. As a project collaborator, Ms Edwards is frequently involved with preparing productions with the Los Angeles Philharmonic. Such projects include John Adams’ operas, El Niño, Nixon in China, A Flowering Tree, and The Gospel According to the Other Mary, as well as Schumann’s Das Paradies und die Peri, Stravinsky’s Persephone, Oedipus Rex and Symphony of Psalms, Shostakovich’s Prologue to Orango, and Bernstein’s Mass, among others. Performances with the Los Angeles Philharmonic Green Umbrella series include, War of the Worlds by Annie Gosfield, and Lou Harrison’s opera, Young Caesar. Other performances include, Steve Reich’s You Are (Variations) at Alice Tully Hall, Stravinsky’s Les Noces at Walt Disney Concert Hall, and Ian Krouse’s Lorca, Child of the Moon at the Bilingual Foundation of the Arts.

Ms Edwards is in demand appearing with Los Angeles Philharmonic, Los Angeles Chamber Orchestra, as well as other national professional orchestras and choruses. Currently, she holds positions as Faculty Artist at Idyllwild Summer Arts, pianist for Vox Femina Los Angeles, organist/pianist at San Marino Community Church, organist/pianist at Stephen Wise Temple in Bel Air, and pianist at Congregation Kol Ami in West Hollywood. Previously, she also held a faculty position at California State University Long Beach, where she taught song repertoire, worked as vocal coach with undergraduate and graduate students, and collaborated on vocal and chamber music recitals with faculty and students. Additionally, Ms Edwards has held faculty positions at Glendale Community College and Pasadena City College. On disc, she can be heard on two Nonesuch recordings of Steve Reich’s music, You Are (Variations) and Daniel Variations. Obtaining her Master of Music Degree from the University of Southern California in Keyboard Collaborative Arts, Ms Edwards graduated with honors, and received her undergraduate degree in Piano Performance from University of North Texas.