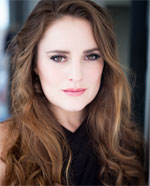 The winner in the Young Singer category of the 2017 International Opera Awards and recipient of the Dame Joan Sutherland Audience Prize at the 2017 Cardiff Singer of the World competition, Louise Alder studied at the University of Edinburgh and Royal College of Music.

From 2014 to 2019 she was a member of the solo ensemble at Oper Frankfurt, where her roles included Cleopatra (Giulio Cesare), Romilda (Serse), Susanna, Despina, Pamina, Gilda, Sophie (Der Rosenkavalier), and the title role of The Cunning Little Vixen. She also appeared in the title role of Calisto at Teatro Real in Madrid, as Zerlina at The Royal Opera, Covent Garden, Gretel and Marzelline (Fidelio) at Bayerische Staatsoper, Ilia and Pamina at Garsington Opera, and Sophie at Glyndebourne Festival Opera and Welsh National Opera. In concert she has notably performed the title role of Theodora at the BBC Proms with Arcangelo under Jonathan Cohen, and appeared with orchestras including the London Symphony Orchestra, Orchestra of the Age of Enlightenment, Chamber Orchestra of Europe, and Mahler Chamber Orchestra.