Recent seasons have included concertos of Tchaikovsky, Martinů, Sibelius, Elgar and Haydn with the BBC Philharmonic and Ilan Volkov, the BBC Symphony Orchestra and Sakari Oramo, the Aurora Orchestra, Royal Northern Sinfonia and the Rheinische Philharmonie. Recent Proms performances include the premiere of Charlotte Bray’s Falling in the fire. Guy continues to play chamber music at Wigmore Hall and in festivals across Europe. He gave the premiere of the Howells cello concerto in Gloucester Cathedral and is delighted to have recorded this piece. Other recent recordings include a celebration of the tricentenary of his David Tecchler cello and Themes and variations with Tom Poster.

Guy is an inspiring leader of young musicians and is involved with several charities promoting music education for young people, including Music First, Future Talent and the Pierre Fournier Award for young cellists.

He is a founder member of the award-winning Aronowitz Ensemble and founding Artistic Director of Hatfield House Chamber Music Festival, a guest Professor of Cello at the Royal Academy of Music, where he was awarded an Hon. ARAM in 2015, and holds a professorship at the Eastman School of Music in Rochester, New York.

Guy plays a 1714 David Tecchler cello, generously on loan from the Godlee-Tecchler Trust which is administered by The Royal Society of Musicians. 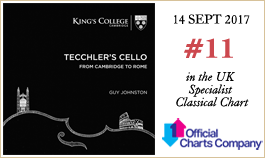