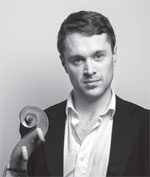 see also Jonathan Rees (cello)
Jonathan Rees has performed across the globe as cellist and gamba player with the UK’s leading historical performance and chamber ensembles. He has performed as continuo / principal cellist and gamba soloist with the Academy of Ancient Music, Orchestra of the Age of Enlightenment, The Sixteen, ENO, Britten Sinfonia, Manchester Camerata, La Nuova Musica and Solomon’s Knot.

He has been employed by the University of Cambridge as a researcher into 17th-century French street song. He has given historical performance classes at the Royal Academy of Music, Guildhall School of Music, Cambridge University and Royal Northern College of Music. He also works as a music workshop leader, and for five years directed and performed at Bristol’s acclaimed annual festival, Really Classical Relay. He is an Associate of the Royal Academy of Music. Outside of the world of music he spends a lot of his time making compost and growing plants for the sustenance of humans, bees, butterflies and even the odd lucky greenfly.