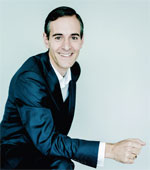 Eduardo Portal made his debut with the London Philharmonic Orchestra in 2011 at the Royal Festival Hall. Since then, he has conducted a wide range of world renowned orchestras. The highlights include working at some of the most important venues including the Berlin Philharmonie, the Royal Albert Hall in London, the Palau de la Música in Barcelona and the Sala Sao Paulo in Brazil.

He was the first ever musician to become a European Young Leader in 2017. This involved meeting and working with prime ministers, heads of state from EU countries, ministers and members of the European Parliament, CEO’s, founders of prominent organisations, activists, researchers, analysts, and others.

He graduated as a Humboldt scholar and as a La Caixa scholar from the University of the Arts Berlin and the Royal Academy of Music in London, and as a Junior Fellow at the Royal Northern College of Music in Manchester.