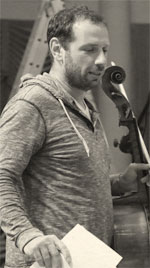 Boris Andrianov was born in 1976 to a family of musicians. He graduated from the Moscow Gnessins’ School of Music, later studying at the Moscow State Conservatoire (class of Natalia Shakhovskaya) and at the Hochschule für Musik Hanns Eisler under the tutelage of David Geringas. In 1991 Boris Andrianov was allocated a grant by the New Names programme.

Since 2005, Andrianov has played the “Domenico Montagnana” cello from the Russian State Collection of Unique Musical Instruments. Since 2009 he has been a professor of Moscow State Tchaikovsky Conservatory.