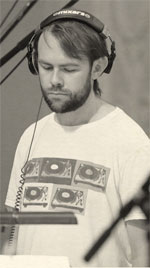 Mr Switch aka Anthony Culverwell is one of the most talented and successful DJs to come out of the UK—noted worldwide for his versatility, party rocking abilities and scratch skills.

Having forged his reputation in the heat of battle, Switch's efforts finally led him to take the ultimate prize and become the reigning DMC World Champion in 2014, winning the longest standing DJ competition in the world. This is his 4th world title, following his back-to-back wins in the ‘Battle For World Supremacy’, 3 years in a row.

Under his previous guise of DJ Switch, Anthony performed as soloist in Gabriel Prokofiev's Concerto for turntables No 1 alongside the National Youth Orchestra in 2011, becoming the first DJ in history to perform on the BBC Proms, the UK’s largest classical music festival.

His other previous credits include providing the closing show at festivals such as Glastonbury, Shambala & Bestival; rocking guest mixes for Radio 1, 1Xtra, Kiss FM & BBC Asian Network—and even the odd TV show, such as BBC Breakfast & Blue Peter.

Mr Switch defines himself through his versatility—having performed across the world, he is able to take any challenge thrown at him. Whether he's dropping a hip hop skills showcase, an electro swing throwback through time, or a multi-genre mash-up, he performs with the same energy, skill and sheer enjoyment of his craft.