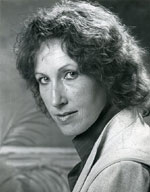 Glenda Simpson has, during the last few years, established a reputation as one of the leading interpreters of early vocal music. With the lutenist Barry Mason she founded the Camerata of London. The group has made numerous recordings of renaissance and baroque music. Glenda Simpson has also recorded with other leadine early music groups, including The London Early Music Group and The Consort of Musicke. She has given many radio broadcasts, including a live performance from the Edinburgh Festival. Glenda Simpson has performed throughout England on the Early Music Network, and has travelled widely in Europe, giving concerts in Holland, Germany, Austria, Belgium, France, Italy, Spain, Portugal, Bulgaria, Hungary, Finland, Sweden, Denmark, Norway and Switzerland. She also tours regularly in the USA, and has recently spent a month in Japan performing a repertoire of English music. Her interest in the Elizabethan Iute song has led her to a detailed study of authentic Elizabethen pronounciation; and as a reviewer commented, singing in authentic pronounciation is '... an important attempt to recreate what the composer neard'.