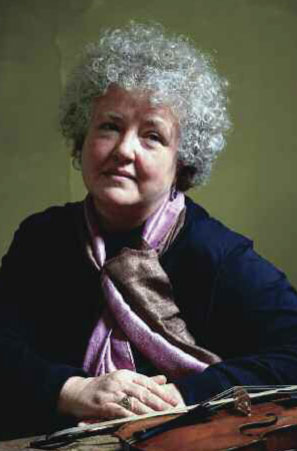 Monica Huggett was born in London, in 1953, the fifth of seven children. In order to differentiate herself from her piano-playing siblings, she took up the violin at age six. Her talent became apparent quickly and, by the age of twelve, it had been decided by her parents and teachers that she would become a violinist, which saved her from the agony of having to decide what to do with her life.

At age sixteen, she entered the Royal Academy of Music as a student of Manoug Parikian. Although she did well and won several prizes, she was not entirely comfortable with her instrument until she was given a Baroque violin to try. She was immediately won over by the mellow quality of the gut strings and became a fervent champion of the Baroque violin. From age seventeen, Monica has earned her living solely as a violinist and artistic director – beginning in London as a freelance violinist – and currently as the newly-appointed first artistic director of the Juilliard School’s Historical Performance Program.

In the intervening four decades, she co-founded the Amsterdam Baroque Orchestra with Ton Koopman; founded her own ensemble Sonnerie; worked with Christopher Hogwood at the Academy of Ancient Music; and with Trevor Pinnock at the English Concert. She also performs frequently as a solo violinist all over the world.

Monica’s expertise in the musical and social history of the Baroque Era is unparalleled among performing musicians. This huge body of knowledge and understanding, coupled with her unique interpretation of Baroque music, has made her an invaluable resource to students of the Baroque violin.

Her recent prizes include the 1997 ‘Editor’s Choice’ award from Gramophone, for J. S. Bach’s Sonatas and Partitas for Solo Violin; the Vantaa Baroque Energy Prize (Finland), 2005; and the ‘Best Instrumental Recording’ award at the Gramophone Awards for Heinrich Biber’s Violin Sonatas, 2002. In June 2009, her CD Music for a Young Prince (Sonnerie), which includes early versions of J.S. Bach’s Four Orchestral Suites, won a Diapason d’Or.