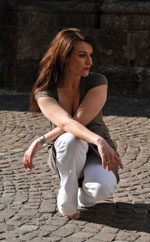 Born in Exeter and raised in Geneva, Christine Buffle’s career reflects her Anglo-Swiss ancestry: she received her musical training at the the Geneva Conservatory, the Guildhall School of Music and Drama in London and the International Opera Studio in Zurich. At the Zurich Opera she gained early professional experience in numerous small roles before making her debut there in 1998 as Queen of the Night, a role which she repeated during the same season for Scottish Opera in Glasgow.

Subsequently Christine Buffle was a regular guest at the Komische Oper in Berlin. Further guest appearances have taken her to Paris, London, Leeds, Basel and Geneva, as well as invitations to festivals such as Edinburgh, Lucerne and Salzburg, where she sang a Blumenmädchen in Parsifal with the Berliner Philharmonic under Claudio Abbado. Among the many other prominent conductors with whom she has worked—including Nikolaus Harnoncourt, Franz Welser-Möst, Marek Janowski, Armin Jordan and Vladimir Jurowski—the late Marcello Viotti is worthy of special mention: under his baton she appeared frequently in concerts with the Münchner Rundfunkorchester and in 2002 sang in a new production of Massenet’s Thaïs at La Fenice in Venice, directed by Pier Luigi Pizzi, which was recorded on CD and DVD.