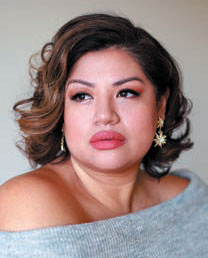 Claudia Chapa has been seen in such theatrically dynamic roles as Azucena from Il Trovatore with Winter Opera St Louis, St Petersburg Opera Company and Opera in Williamsburg and Madame Flora from The Medium and the Witch from Hänsel und Gretel with Opera in the Heights. Engagements include Zita from Gianni Schicchi and Zia Principessa from Suor Angelica with St Petersburg Opera, Fenena from Nabucco with West Bay Opera, Mary from The Flying Dutchman with Austin Opera, Alto soloist for Verdi’s Requiem and featured soloist for De Falla’s El Amor Brujo and Lieberson’s Neruda Songs with the Alabama Symphony, Alto soloist for Mahler 2nd Symphony and Bloody Mary from South Pacific with the Gulfshore Symphony, Alto soloist for Bruckner’s Te Deum with the Austin Symphony, Hedwige from William Tell and Ortrud from Lohengrin with Opera Southwest, Dryade from Ariadne auf Naxos with Austin Opera, Zita from Gianni Schicchi and Buoso’s Ghost with Opera Delaware, Berta from Il Barbiere di Siviglia for Opera San Antonio, Dame Quickly from Falstaff with Winter Opera St Louis and Opera in the Heights, Marthe from Faust with Indianapolis Opera, Third Lady from Die Zauberflöte with the Glimmerglass Festival, Portland Opera To Go, and Austin Lyric Opera, and covering the Old Lady from Candide with Glimmerglass Festival. Ms Chapa has been heard in Verdi’s Requiem, Beethoven’s 9th Symphony, and Handel’s Messiah with DCINY. Ms Chapa received her training from the Butler School of Music at the University of Texas-Austin. She is an alumnus of the prestigious young artist programs including the International Vocal Arts Institute (both in Blacksburg, VA and Tel Aviv, Israel), Des Moines Metro Opera, and the Glimmerglass Festival for which she was chosen as a young artist for two consecutive seasons.