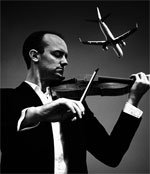 Born in New Zealand, Benjamin studied at the Yehudi Menuhin School and the Royal College of Music where he was awarded the Queen Elizabeth the Queen Mother Rose Bowl.

In 2016 he won 1st Prize at the Young Concert Artists auditions in New York and in 2017 3rd Prize at the Michael Hill Competition in New Zealand, establishing a strong international presence.

Since then Benjamin has gone on to perform widely throughout the USA and Europe, including a critically acclaimed debut at Merkin Concert Hall in New York, recitals at the Kennedy Center in Washington DC, Festspiele Mecklenburg-Vorpommern, Steirisches Kammermusik, and regular appearances at Wigmore Hall. Further afield he has undertaken tours of China, South America and New Zealand. In 2019 he made his debut at the Al Bustan Festival in Beirut, and the Sanguine Estate Music Festival in Melbourne, Australia.

Equally at home as a chamber musician Benjamin has taken part in the Bridgehampton Chamber Music Festival with Anthony Marwood and Caramoor Rising Stars series in the USA, and regularly returns to the Pärnu, East Neuk and Northern Chords Festivals. He has also collaborated as a soloist with the Royal New Zealand Ballet Company and in 2015 released his first CD on the Champs Hill label.

Hugely popular in New Zealand Benjamin returns whenever he is able, to give concerts and appear on radio and television. He moved to the UK in 1998 with his family to study at the Yehudi Menuhin School, on the recommendation of Nigel Kennedy.

Benjamin plays on a Tononi violin (1709) on generous loan from a private individual.