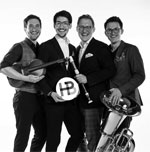 The four Hanke Brothers from Sindelfingen in Germany grew up in a family immersed in classical music and received numerous awards at a young age.

David Hanke studied the recorder in Zurich, Vienna and Amsterdam with specialisations in choir conducting, folk music and electronic music. Working as both a soloist in wind and symphony orchestras, and as an improviser, he has used the recorder to overcome many of its perceived genre boundaries.

Lukas Hanke plays viola and drums and is an enthusiastic chamber and orchestral musician—performing with groups such as the STEGREIF.orchester (the improvising symphony orchestra) and the Junge Deutsche Philharmonie. He studied the viola in Stuttgart and was fellowship holder of the Vienna Philharmonic Orchestra.

Jonathan Hanke currently studies the piano in Stuttgart, where he specialises in choir conducting, jazz piano and composing. He’s an enthusiastic classical and jazz musician and a sensitive accompanist. As well as his work as an instrumentalist he also composes and arranges for the Hanke Brothers as well as for other artists.

Fabian Hanke plays the tuba and violin. Since his first tuba sounds he has been celebrating successes throughout the years and never ceases to be surprised by the sounds emanating from this giant instrument. Like all his brothers, Fabian studies his particular instrument in Stuttgart. He’s a fellowship holder of the German Tuba Society.

The four brothers began performing together at a young age, mostly in churches. Their repertoire included original classical music and arrangements of works by Chopin and Vivaldi among other composers. Since then their musical collaborations have taken them across Europe, Russia and the USA. They have commissioned over 30 original compositions for their novel combination of instruments, including works by Aleksey Igudesman, Oystein Baadsvik and Stephan Boehme. They have also performed authorised arrangements of works by Garth Knox and Daniel Schnyder among others.