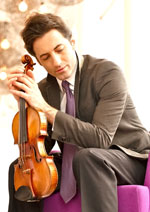 Multi-Grammy-Award-nominee and violinist Philippe Quint is internationally recognized for his unique and insightful approach to standard repertoire, championing of neglected works, and embarking on imaginative, exciting journeys of exploration and collaborations with artists of different genres. ‘Truly phenomenal’ is how BBC Music Magazine described him, adding that ‘Quint’s tonal opulence, generously inflected with subtle portamentos, sounds like a throwback to the glory days of Fritz Kreisler’.

An American violinist of Russian heritage, Philippe regularly appears with major orchestras worldwide at venues ranging from the Gewandhaus in Leipzig to Carnegie Hall in New York, also making frequent guest appearances at the most prestigious festivals including those in Verbier, Aspen, Colmar and Dresden, and at the Hollywood Bowl in the USA.

Having made his home in New York since 1991, Philippe was born in Leningrad (now Saint Petersburg) and studied at the Moscow Central Music School for the Gifted with Russian violinist Andre Korsakov, making his orchestral debut at the age of nine. After moving to the United States, he earned both Bachelor’s and Master’s degrees from the Juilliard School. His pedagogues and mentors there included Dorothy DeLay, Cho-Liang Lin, Masao Kawasaki, Isaac Stern, Itzhak Perlman, Arnold Steinhardt and Felix Galimir.

Philippe Quint plays the magnificent 1708 ‘Ruby’ Antonio Stradivari violin, on loan to him thanks to the generous efforts of The Stradivari Society.