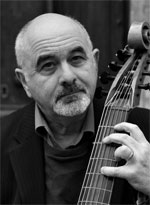 see also Richard Boothby (cello)
see also Richard Boothby (viol)
Richard has been playing the viol ever since David Fallows handed him a tenor viol in 1977. He was attempting to teach him about Wagner’s ‘Ring’ in Manchester University, and he was in his final year as an undergraduate there. After further study with Nikolaus Harnoncourt in Salzburg, he founded The Purcell Quartet in 1984 and Fretwork in 1985.

He has endeavoured to enrich the viol-consort repertory with new music from today’s finest composers, from Elvis Costello to George Benjamin, from Alexander Goehr to Nico Muhly.

With the Purcell Quartet, he recorded nearly 50 albums for Hyperion and Chandos; and with Fretwork over 30 albums for Virgin Classics, Harmonia Mundi USA and most recently, Signum Classics.

He has arranged and transcribed many of the great keyboard music of J S Bach for viols, which were recorded under the title ‘Alio Modo’; and then his arrangement of the Goldberg Variations was recorded by Fretwork.

In 1998 he directed performances of Monteverdi’s L’Incoronazione di Poppea with the Purcell Quartet; and in 2001 directed them in a fully staged production of L’Orfeo, with Mark Padmore in the title role.

He is professor of Viola da Gamba at the Royal College in London and teaches on the Marnaves viol course in southern France.