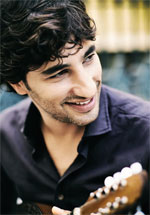 The first mandolin soloist to be nominated for a classical Grammy, Avi Avital is one of the foremost ambassadors for his instrument. Passionate and 'explosively charismatic' (New York Times) in live performance, he is a driving force behind the reinvigoration of the mandolin repertory. More than 90 contemporary compositions, 15 of them concertos, have been written for him, while his inspired re-imaginings of music for other instruments include the arrangements heard on his 2014 recording Between Worlds.

Enhanced by his infectious spirit of adventure and the warm rapport he fosters with his audience, Avital’s championship of his instrument is taking the mandolin centre stage. 'The exciting part of being a classical mandolin player', he says, 'is that it opens a wide field for creative freedom. When I commission new pieces and engage with different musical styles, I feel that I am bringing to light new faces of this unique instrument, uncovering what is hiding there.'

An exclusive Deutsche Grammophon artist, he has made four recordings for the label including his ECHO Klassik Award-winning Vivaldi (2015).

Earlier releases featured his own Bach concerto transcriptions (2012) and Between Worlds (2014), a cross-generic chamber collection exploring the nexus between classical and traditional music. He has also recorded for Naxos and Sony Classical winning a first ECHO Klassik Award for his 2008 collaboration with the David Orlowsky Trio.