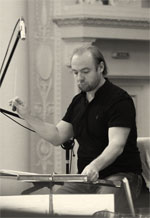 Alexey Bogorad is a resident conductor of Moscow’s acclaimed Bolshoi Theatre, a position he has held since 2011. His 2011 triumph at the Lovro von Matacic International Conducting Competition in Zagreb pushed him to the front ranks of today’s generation of European conducting talent.

An experienced solo clarinetist and chamber musician, Bogorad was a principal player of the Bolshoi Theatre Orchestra from 1997 to 2011. In addition, he was a soloist of Mikhail Pletnev’s Russian National Orchestra from 2001 to 2012.

Maestro Bogorad performs as guest conductor at various Russian opera companies and symphony orchestras including the Russian National Orchestra, the St Petersburg Academic Symphony Orchestra, and Perm Opera Theatre. In 2013 he substituted for Valery Gergiev conducting the Mariinsky Theatre Orchestra during the G20 Summit in St. Petersburg. In 2015 he was honored to conduct the piano finals of the XV Tchaikovsky International Competition in Moscow, live-streamed by Medici TV with more ten million viewers worldwide.

Since 2015 he has been guest conductor of the Ekaterinburg opera and ballet theatre. In 2017 Nominated for the Russian National theatrical prize “Golden Mask”, and since 2018 appointed as Artistic director of “Boldinskaya Autumn” opera and ballet festival in Nizhniy Novgorod theatre.