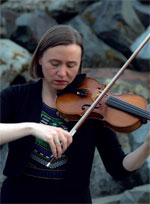 American violinist Cecily Ward was born in Salt Lake City, Utah and began studying violin and piano at the age of four. She was the founding first violinist of the San Francisco based Cypress String Quartet, a position she held for twenty years until the quartet disbanded in 2016. With the Cypress Cecily performed throughout the United States and Europe, and recorded 16 critically acclaimed albums including the complete Beethoven Quartets. Praised for her ‘lithe finesse,’ ‘charm,’ and ‘rhapsodic violin,’ she has collaborated with esteemed musicians including cellist Gary Hoffman, pianist and conductor Leon Fleisher, pianist Walter Ponce, and cellist Zuill Bailey.

A graduate of the Interlochen Arts Academy, Cleveland Institute of Music and San Francisco Conservatory of Music, Cecily’s mentors have included Donald Weilerstein, Norbert Brainin, Zoltan Szekely, Bonnie Hampton, Sylvia Rosenberg, Robert McDonald and Isaac Stern. Ward currently lives in London, UK, with her husband Mark Willsher and their two Portuguese Water Dogs. She is on the violin faculty at the Royal Northern College of Music, and can be found freelancing in chamber orchestras throughout the UK.