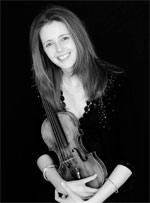 Alexandra was born and brought up in Great Hampden before embarking on a music degree at Selwyn College, Cambridge, where she was awarded a first class honours degree. She then attended the Royal Academy of Music as a student of Erich Gruenberg, graduating with Distinction in 2008. Two years later she was appointed a member of Britten Sinfonia, with whom she now tours both the UK and abroad to countries such as China, Mexico and Brazil. Other Britten Sinfonia highlights have included performing Vivaldi’s 'Autumn' from The Four Seasons in the City of London Festival, playing with the orchestra in the BBC Proms, and performing in the Sistine Chapel.

Alexandra has also worked with the London Sinfonietta, the Philharmonia Orchestra, the City of Birmingham Symphony Orchestra, the Royal Philharmonic Orchestra, Aurora Orchestra, the Ulster Orchestra, and the BBC National Orchestra of Wales. As a keen chamber musician she is a member of the Hampden Quartet and Goldfield Ensemble, as well as performing in a Violin Duo with her sister. Alexandra also plays frequently with the London Chamber Orchestra, with whom she was privileged to perform at the Royal Wedding in 2011. More recent highlights with LCO include tours to Hong Kong and Turkey, as well as meeting her husband Alex while working with the orchestra in 2013!

Alexandra enjoys recording work for television and films, and she also loves leading CantiaQuorum: the orchestra she has founded with Alex in Canterbury.