The Elysian Singers of London is one of the UK’s leading chamber choirs. Known for its adventurous programming, the choir performs in and around London and has recorded many widely acclaimed CDs. The Elysians pride themselves on combining high performance standards with a friendly and relaxed atmosphere. Founded in 1986 by Matthew Greenall, the group quickly developed an interest in contemporary music, giving world premières by a number of composers including John Tavener who, from 2002 until his death in 2013, was the choir’s Patron. Matthew was succeeded as music director by Sam Laughton in 2000. Recent world premières include a performance of Sir John Tavener’s Monument to Beethoven at the Royal Festival Hall (2014), John Habron’s Salve regina (2008), and Exile Lamentations (2009) a commission by Paul Stanhope. The choir regularly performs Baroque, Romantic and 20th-century masterpieces at venues such as St Martin-in-the-Fields and St John’s Smith Square, and participates in festivals across the country. In 2004 the Elysians released their first CD of music by James MacMillan, Cantos sagrados, which received a 5-star rating from BBC Music Magazine. Reviewing ‘Songs of the Isles’, the choir’s 2009 Bantock release, the same publication spoke of the Elysians’ ‘young, fresh-toned voices, brightly attentive to text’. TV and radio highlights include the first broadcast performances of Henryk Górecki’s Miserere and Three Lullabies on Radio 3, appearances with Lesley Garrett, and the finals of the Sainsbury’s Choir of the Year competition. The choir performed live on Radio 3’s ‘In Tune’ in 2011, introducing the première of its latest commission, Timepieces by Ian Stephens, and their CD, The Spirit of Christmas Present, released on Meridian. Their next CD Timepieces was released in 2014 and presents works that the choir has commissioned or premièred. In 2015 the upper voices of the choir made their debut performance at the BBC Proms, providing the offstage chorus for Holst’s The Planets with the BBC Symphony Orchestra, and the in 2017 the lower voices were delighted to make their debut with the violist Lawrence Power at the West Wycombe Chamber Music Festival. Sir James Macmillan is now the choir’s patron. 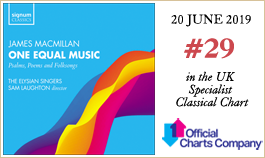