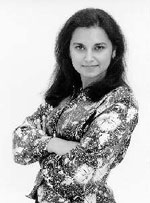 Regina Nathan studied in her native Ireland with Nancy Calthorpe at The College of Music, Dublin; also with Elizabeth Hawes at Trinity College of Music, London, and later at the National Opera Studio. During the 1991/2 season she represented Ireland at the fifth Cardiff Singer of the World Competition to considerable acclaim, shared a special concert with Placido Domingo in Dublin, and was voted outstanding New Entertainer of 1991 by the National Entertainment Awards, Ireland's most prestigious awards ceremony.

Regina Nathan is much in demand as an oratorio and concert soloist. Recent engagements included performances of Mahler's Symphony No 4 and Mozart's Exsultate, Jubilate with the BRT Philharmonic Orchestra, Brussels.