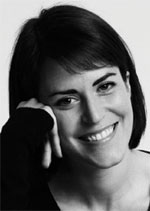 Rachael Lloyd trained at the Guildhall School of Music and Drama and made her professional debut with Glyndebourne Touring Opera in 2005 singing the role of Shelley in the world premiere of Jonathan Lunn’s opera Tangier Tattoo. Since then she has also sung the role of Meg Page in Verdi’s Falstaff for the same company and Cornelia in Handel’s Giulio Cesare for Glyndebourne Festival Opera.

As a recitalist Rachael was invited to Lille Opera house to sing Schumann’s Fraueliebe und Leben and Elgar’s Sea Pictures which she has also performed at St John’s, Smith Square in London. Concert performances include the alto solos in Handel’s Messiah at the Royal Festival Hall, Trois poèmes de Stéphane Mallarmé with the London Philharmonic Orchestra and a series of Viennese concerts and Rossini’s Stabat Mater with Ulster Symphony Orchestra in Belfast. Other operatic highlights include Mrs Anderssen in Stephen Sondheim’s A Little Night Music at the Châtelet in Paris, Dido in Purcell’s Dido and Aeneas for Theater Thuringen in Gera, Germany, Maddalena in Verdi’s Rigoletto for Iford Arts and Amastris in Handel’s Xerxes for English Touring Opera. Rachael also made her Royal Opera House debut as Kate Pinkerton in Puccini’s Madam Butterfly.