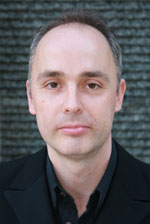 see also Patrick Craig (harp)
Patrick Craig trained as a countertenor at the Royal College of Music with Ashley Stafford. For the last fifteen years Patrick has combined singing at St Paul's Cathedral in London with over seven hundred concerts with the renowned renaissance sacred music consort, The Tallis Scholars. Singing with The Tallis Scholars has taken him all over the world, and led to Patrick teaching and conducting on Tallis Scholars Summer Schools in Oakham, Seattle and Sydney. Patrick is also a member of The Cardinall's Musick, which he has guest directed at the Aldeburgh, Brighton and Brinkburn Festivals. He was proud to feature in the group's project to record the entire Latin Sacred Music of William Byrd, the final volume of which won the Gramophone Record of the Year award in 2010.

Patrick enjoys various solo opportunities which have recently included Bach's Christmas Oratorio in Hereford, Pergolesi's Stabat mater in St Paul's, and Handel's Saul in Chelmsford, where he both sang the role of David and also played his harp solo. Patrick also directs his all-female professional choir, Aurora Nova, who regularly provide the music for Sunday worship at St Paul's Cathedral.