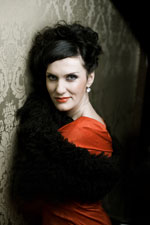 Václava Housková studied at the Academy of Performing Arts in Prague. Her main mentors there were soprano Helena Kaupová, and vocal coach and pianist Mark Pinzow. Outside of the Academy, she participated in masterclasses with Margreet Honig.

Her first contract was as a soloist in the Moravian Theatre Olomouc, where she sang lead mezzo-soprano roles in Mozart’s Così fan tutte, Verdi’s Falstaff and Nabucco, Tchaikovsky’s Eugene Onegin and Rossini’s Il barbiere di Siviglia. Currently engaged in the National Theatre Brno, Václava has performed the title role in Carmen, Ježibaba and Káča in Dvořák’s Rusalka and Čert a Káča respectively, Isolier in Rossini’s Le comte Ory, Daphnis in Tchaikovsky’s The Queen of Spades and Siébel in Gounod’s Faust.

Václava made her debut in the National Theatre in Prague as Carmen in 2014. It was at this alma mater of Czech opera that she also performed as Cherubino (Le nozze di Figaro), Third Lady (Die Zauberflöte), Lapák (The cunning little vixen), Death (Stravinsky’s The Nightingale) and Laura (Tchaikovsky’s Iolanta).

As a guest soloist she has cooperated with the F X Šalda Theatre in Liberec (Tigrana in Puccini’s Edgar and Orfeo in Gluck’s Orfeo ed Euridice) and the J K Tyl Theatre in Plzeň (Nicklausse and the Muse in Offenbach’s Les contes d’Hoffmann).

In 2014 she was nominated for the Thalia Prize for her successful stage performance as Smeton in Donizetti’s Anna Bolena. In autumn 2018, the European theatres project OperaVision recorded The cunning little vixen in the National Theatre Brno where Václava sang the role of the Fox.