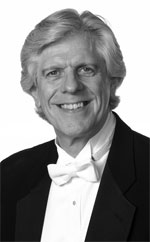 Robert Simpson is founder and artistic director of the Houston Chamber Choir, and Canon for Music at the historic Christ Church Cathedral (Episcopal), Houston, Texas. He also serves on the faculty of the Rice University Shepherd School of Music. Robert is the recipient of Chorus America’s Michael Korn Founders Award for the Development of the Professional Choral Art and the American Prize in Choral Conducting.

Invitations to present concerts and masterclasses have taken him throughout the United States, Europe and China. His choirs have appeared at national conventions of the American Guild of Organists, the American Choral Directors Association, and have been heard on CBS and ABC television and National Public Radio.

An honors graduate of Brown University and the School of Sacred Music at Union Theological Seminary, New York City, Robert continued his education at the Conservatory of Music, Cologne, Germany. He earned the S Lewis Elmer Award from the American Guild of Organists for attaining the highest scores on the professional certification exams in 1989.