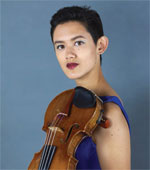 Stephanie Childress is a violinist and conductor from London. Born in May 1999, she started playing the piano at the age of five and the violin at the age of six. She is a graduate of St John’s College (University of Cambridge) where she read Music and was President of the College Music Society (SJCMS).

Having joined the National Youth Orchestra of Great Britain in 2013, Stephanie co-led the orchestra in 2014 and was appointed as Leader for the 2015 season.

In July of 2014, she won the LSO String Academy Candide Award for Outstanding Performance, and in 2015, was a Finalist at the Eastbourne Symphony Orchestra Young Soloist Competition having also received the First prize for under-18.

She was a finalist in the 2016 and 2018 Strings Category of the BBC Young Musician Competition. In December 2016, she toured Germany as the leader of the Balsom Ensemble for trumpeter Alison Balsom. This included a televised concert for Arte and culminated in a performance at the Wigmore Hall. She studies with the leader of the London Philharmonic Orchestra, Pieter Schoeman, and plays a 1710 violin made by Francesco Gobetti.

As a conductor, she is passionate about opera and has conducted performances of Britten’s The Rape of Lucretia and Berkeley’s A Dinner Engagement. Other projects have included Beethoven’s ninth symphony in St John’s College Chapel and a run of Gilbert and Sullivan’s Ruddigore at West Road Concert Hall in February 2018.